MCH2022 camp is now over and the Finnish village empty in the scouting field of Flevoland, the Netherlands. Helsinki Hacklab was represented alongside with Hacklab.fi, HelSec, TurkuSec etc. other groups and individuals, plus joining forces with other Nordic villages forming the Cold North cluster in “the noisy corner”.

Originally the camp was supposed to be in 2021 but got postponed to 2022. In total the participant count was about 3 500 hackers, many of volunteering as well. If you want to get a glimpse of the atmosphere, get to know what the event is all about, most of the streamed talks are already archived online.

The village cluster got lucky the rental sauna, after a competing reservation for a different event got canceled and the idea was greenlighted from the organizers. Just like last time, the awesome new conference badge also got an app for the temperature tracking, though this time our village managed to release it quickly on day zero. As usual, our party tent was full of salmiakki in all shapes and forms except for salmiakki ice cream.

The villagers pushed maybe three or more apps in the badge app store, took volunteering tasks, competed in the CTF and arranged workshops or talks. Helsinki Hacklab provided laser cutted deco for the area. Our machine works great for this type of job because the the working area enables cutting large banners with a single run.

Thank you for everyone who took part in the spring meeting! 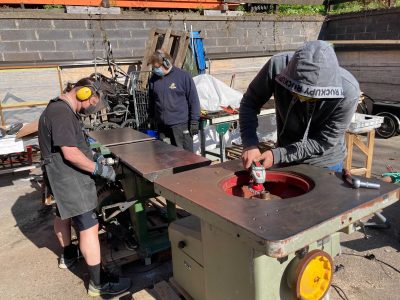 The place is our premises in Takkatie 18, but we recommend to join the meeting online instead, if possible. The join link is shared in Slack, irc and Telegram before the meeting starts.

The usual early fall rush hours have started, we have new people visiting and lots of projects going on. This blog post tries to catch up recent months that have been yet uncovered since summer.

This year’s major European hacker camp Chaos Communication Camp 2019 was in Germany, in the same brick factory musem as in 2015. Hacklab.fi was there together with infosec groups TurkuSec, HelSec and others, joining forces under the moniker Salmiakki Village. Just like at SHA2017, the Nordic hackerspaces such as Labitat, Hackeriet and Xil.se, formed a combined tent village Cold North which Salmiakki was a part of. Together, we got a nice spot in the shadows and next to a balcony to get away from the heat of day.

Building a village this size the logistics was split in two batches: Oulu people sent a 3m high fully loaded pallet of mostly personal, networking, electricity and lightning stuff, and Helsinki Hacklab drove a van through the Baltics and Poland [photos] loaded with a party tent, a fridge and lots of other larger items. Most stuff ended up being used and not much was lacking from the load. We’re getting good in this.

Salmiakki village was essentially a party place, but we had also packed some nice light effects, video art and of course salmiakki in different form. The village also was the homebase for Finnish CTF team, which ranked sixth in end results. Big thanks for Ponakka for lending us the sound system, which we hooked up into Rambo’s Technics turntable pair. Sadly we got no permission for a sauna this time (though a pizza oven elsewhere in the area was excused for some reason). We had to regret the unfortunate situation for many people, but the area had high risk of forest fires that time and electricity too scarse. Hopefully this can be fixed next time in the forthcoming IFCAT camp in Netherlands year 2021, like we had at SHA camp.

We had some time to visit Fukusima Sauna in Riga on our return trip. Thanks long time hacklab member Vihannes for hosting us and showing us around. Next time we try to plan ahead so we have time to also try out the sauna itself and see the local makerspace. The Cold North area is going to be developed further with more shared planning, information exchange and other coordination. There is the Nordic mailing list and even a new wiki set up by Hackeriet. For the next camp, the cluster should return even greater than this year!

Woodwork room got some new space after moving the dust vacuum in a different spot outside the room itself. The pipings and hoses that move the dust now have more outlets, which means even hand tools should be easy to attach. The vacuum is now located next to our back door emergency exit on ground floor. Thanks to Depili and Harald for making most of the work.

The mitre saw was changed to a new one, that has a soft start motor and built-in laser guide. Tarmo has worked on a router table, but there is still some work to do and parts to be changed, but it’s looking good already. The wood workshop also got new lights, because the old ones started to crack in pieces when opening the dust cover. There are some new fire extinguishers and quite many old ones here and there, and the wood workshop got an extra first aid kit. We got no instructions to correct anything in the space after a fire inspection took place. Remember to keep the emergency exit area clean of any trash or workpieces.

Helsinki Hacklab made a contract with a local cleaning service and scheduled a cleanup every two weeks, including the meetup room, kitchen, 3D-printing area, toilets and other semi clean rooms, which do not include the woodworking room and metal work rooms. Hopefully this helps us to maintain a tidier hackerspace when the volunteer does not have to start from complete disaster each time they have a need to clean something. After painting the floor in July, the place looks a lot better and the new surface is easier to clean.

Aluminium welding is something quite many people have asked, but due to the difficulty of learning it by yourself, many have hesitated to give it a try. Luckily, Anle knows the processa and promised us to arrange a weekly workshop. The interest in the course was anticipated to be high, so we eventually had to use lottery to choose participants. As of writing this, there are still two lessons left in this course. We cannot yet promise if there will be any repetitions of the course in near future.

The welding course is not the only skill we have teached each other this September. Other tools we’ve given courses in include the metal lathe, laser cutter and various woodworking tools. If any of our members know a skill and want to share knowledge, there is always a possibility to have either small introductions, recurring lessons or even weekend long intensive workshops. We have few people from hacklab.fi, and more from HelSec and TurkuSec plus others. The Finnish group is about twenty participants this year. We’re located between Labitat, Xil.se and Hackeriet in The Cold North area.

Get yourself a sticker or a stamp in your hackerspace passport at our table.